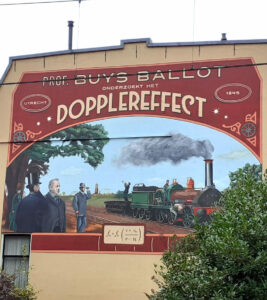 What do we see here?

This mural painting shows physicist and meteorologist Christophorus Buys Ballot (1817-1890) who proved the existence of the Doppler Effect. You can find this painting at the Burgemeester Reigerstraat 9 in Utrecht. You can see it clearly from the train tracks near the staion Maliebaan.

The Doppler Effect is a phenomenon that occurs when objects emit waves, for example light or sound. If you observe these waves while the source moves, or if you are moving while observing the waves, it looks or sounds like these waves have a different wavelength. Sound becomes more high- or low-pitched. You will notice this effect when a car with a siren drives past: the sound will become higher when the car comes near, and it will become lower when the car has driven past you.

The Austrian physicist Christian Doppler predicted this effect in 1842. Buys Ballot executed an experiment which proved the existence of the Doppler Effect in 1845. You can see this experiment on the painting.

Who was Buys Ballot?

Christophorus Hendricus Dedericus Buis Ballot was born on October 10 1817 in Kloetinge, a village in the province Zeeland. He started studying classical languages in 1835 but switched to maths and physics a year later. In 1844 he got a doctorate on cohesion and adhesion, the attraction between molecules in fluids. In 1845 he started lecturing geology, mineralogy and theoretical chemistrty.

During his time at the university he lectured, wrote books about chemistry and he proved the Doppler Effect. But his work mainly focused on meteorology. He founded the Royal Dutch Meteorological Institute (KNMI in Dutch) in 1854. He constructed Buys Ballot’s law in 1857. This law states that air will always stream from areas with a high air pressure to areas with a low pressure. With this the direction of the wind can be determined and weather forecast became possible. Buys Ballot died on February 3 1890 in Utrecht.

Wat did Buys Ballot do in Utrecht?

After graduating from the gymnasium he started his studies at Utrecht University. After graduating here he remained involved in this place as a doctoral candidate, lecturer and researcher. He lived in Utrecht from his early college years until his death. The KNMI he founded was based in the observatory Sonnenborgh. Later the institute moved to De Bilt.

The first Buys Ballot Medal was handed out in 1887. Every ten years the Royal Dutch Academy for Sciences (KNAW in Dutch) grants this medal to a person who contributed largely to meteorology. Utrecht University opened the Buys Ballot building in 1975. A part of the science faculty is housed here.

What did Buys Ballot discover here?

Buys Ballot executed an experiment that proved the existence of the Doppler Effect. This effect takes place when a moving object emits light, sound or another wave phenomenon. If the source or observer moves, the observer will perceive a different wavelength and frequency from the original wave.

This effect has a lot of applications in daily life. The best known example is the passing of a car with a siren. The sound will become higher and lower. Astronomers use this theory to determine the speed and distance of moving objects in space using their colour. Some traffic cameras use the effect to measure the speed of cars driving past. The effect is also used for echolocation in medical devices and rain prediction software.

How did Buys Ballot discover this?

The Austrian physicist Christian Doppler (1803-1853) described the theory of the Doppler Effect in 1842 when he investigated the colour of stars. Buys Ballot did not believe this theory was right. To prove Doppler was wrong he decided to do an experiment in 1845.

He arranged a train consisting of a locomotive and a flat wagon. He put a group of musicians playing horn on the wagon. The train rode on the tracks from Utrecht to Maarssen. A group of spectators stood along the tracks. They had to listen if they heard a difference in pitch. Buys Ballot turned out to be wrong: everyone heard higher tones when the musicians neared and lower tones when they were moving past. Doppler’s theory was right.

What does the formula mean?

The Doppler Effect can be described with the following formula:

The letters have the following meanings:

If the observer and source are moving to each other vw and vb are positive. If they move away from each other they are negative.

Let’s make this formula more clear with an example. You are standing on the edge of a road and a police car passes with a siren. The car has a velocity of 72 kilometres per hour and the siren has a frequency of 500 Hertz (Hz), comparable to the musical note b’.

The car (the source) is driving with a speed of 72 km/h. The speed of sound depends on factors like temperature and air humidity. On room temperature this is approximately 1234 km/h. You are standing still, so the velocity of the observer is 0 km/h. In science velocity is expressed in metres per second (m/s). If you convert this you will get these values:

If the car nears us, we can fill in the formula the following way:

If the car nears, you can hear a frequency of 531 Hz, comparable to the musical note c’’. This is one full pitch higher than the siren actually emits. If the car moves away from us, the formula will look like this:

So we will hear a lower pitch than emitted.

Where can I find this mural painting?